Yesterday President Dieter F Uchtdorf mentioned Dresden, the ancestral home of my Knauke family and ancestors.  President Uchtdorf talked about the rebuilding of the Frauenkirche.  He recalled a haunting childhood memory of dashing to a bomb shelter near Dresden when explosives dropped on his hometown.

He then spoke of Dresden which was almost entirely destroyed by carpet bombing in World War II.  One of the losses was the historic Lutheran Frauenkirche.  The building was left in a pile of rubble from 1945 until the time for its reconstruction arrived in the early 1990s.  The building was completed in about 2005.

President Uchtdorf’s stated, “As I pondered the history of Dresden and marveled at the ingenuity and resolve of those who restored what had been so completely destroyed, I felt the sweet influence of the Holy Spirit.”

“Surely, I thought, if man can take the ruins, rubble, and remains of a broken city and rebuild an awe-inspiring structure that rises toward the heavens, how much more capable is our Almighty Father to restore His children who have fallen, struggled, or become lost?”

Frauenkirche in rubble and ruin after 1945

Amanda and I visited Dresden and only spent about a day there.  I remembered hearing stories of the beauty of Dresden told by my Grandmother she had heard from her Grandmother, Christiana Wilhelmina Knauke Andra.  This Frauenkirche’s restoration was a highlight and the major must see site when we visited.  Here is a picture of the Frauenkirche provided to me by my sister Becky after her visit there in 2004.

Amanda created this panorama from the other side of the River Elbe.  You will have to click on it to really see it very well.

The Frauenkirche is one of the two main churches visible in this picture.  Lutheran on the left, the Katholische Hofkirche on the right.

Here is my mug shot with Frauenkirche. 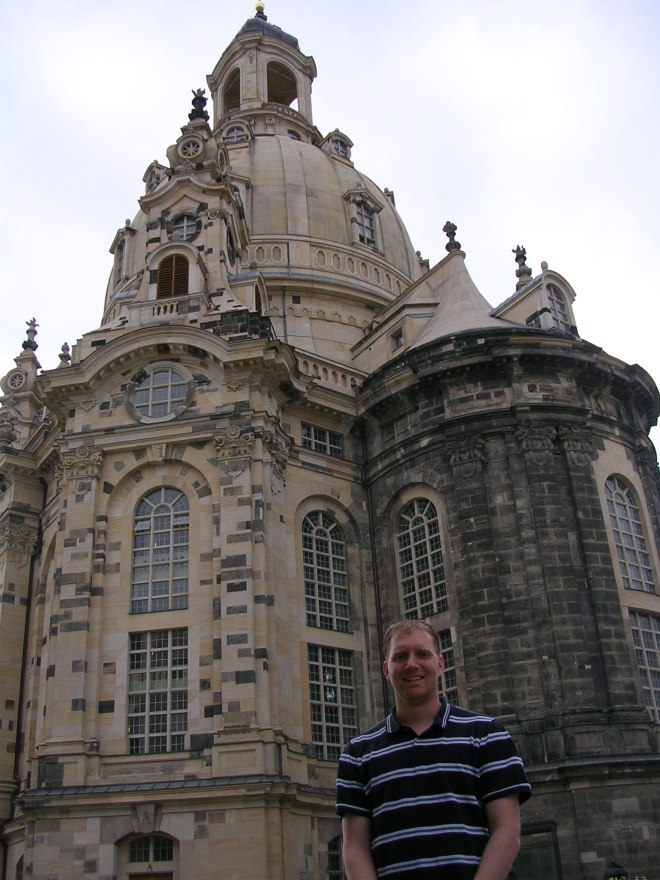 Amanda and I attended an organ concert in the building 11 June 2008.  I don’t know what we were thinking, but we did not get a single picture inside of the building.  We were up in one of the balconies, it was amazing.  Some day I hope we are able to return.  The beauty and architecture inside the building were beyond what I could have imagined.

We also saw other rebuilt buildings in Dresden.  I quite liked the Zwinger Palace with its reconstruction completed about 1965.  The Phoenix story of Dresden is moving in most of its details and timeline.