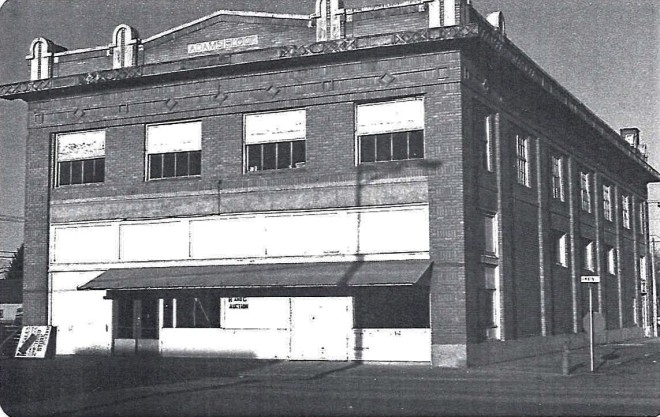 I came across some pictures of Paul, Minidoka County, Idaho recently.  Thank you to the City of Paul for making them available.

I remember this building as a kid.  Somehow the alley immediately behind this building I seemed to get puncture weeds that would flatten my tire and then I had to walk over to the tire store to get it fixed.  I felt an attachment to the building even though I never entered that I recollect.  I was saddened when they tore the building down in the late 1980’s or early 1990’s.

The photo says it was the Paul Store Co. on Idaho Street and Main Street in Paul.  Just behind the building away further to the right is Paul Elementary.  I don’t know anything about Paul Store Co. but this photo has K & C Auction written on the front of the building.

I think the Adams Block at the top of the façade is more interesting.

J. E. Earley and Frank Adams were the founders of the Southern Idaho Review, a newspaper that was established in Heyburn, not far from Paul.

Francis “Frank” Henry Adams was born 18 September 1880 in London, Middlesex, Ontario, Canada.  I am not sure exactly why he came to the Minidoka Project, but he was involved with the Heyburn newspaper very early on.  The Heyburn website indicates the newspaper started publishing in 1905.

Frank then went on to marry Clara Louise Schodde, son of the well-known rancher Henry & Minnie Schodde whose homestead is located about 3.5 miles west of Heyburn, about 2.5 west of Paul and about 3 miles to the south.  Clara, born 1 August 1884, is claimed the first baby born in the area north of the Snake in what is now Minidoka County.  Frank and Clara married 10 June 1908 in Heyburn by Rev. Merkins.

I remember walking along Main Street when the building was being demolished.  I saw the old Adams Block blocks sitting in the rubble and wanting to climb the fence to grab them and take them home.  Funny what memories we recall.

One thought on “Adams Block”