I have too many photos sitting in folders waiting for a post or a time.  Now is the time to write about the great eclipse of 2017.

I first found out about the eclipse nearly a year in advance.  I found out the eclipse would pass directly over Rexburg on 21 August 2017.  I reached out to Brad Hales, a former missionary companion, roommate, and still good friend.  I booked a weekend at the Hales Hotel in Rexburg for the weekend.  I had a good laugh because this was the first he had heard about the eclipse.

We made our way to Rexburg early to beat the crowds.  We arrived, set up in our quarters, and we went out to do some visits.  Brad and I paid a visit to our former Mission President and his amazing wife, Phil & Patsy Wightman.  They had been in a very serious automobile accident within a year or so before so we were very happy to see them and that they are well on the mend.

There were other missionaries there when we stopped.  We were not the only ones with the idea to pay a visit at the Wightman home.  While we were there, we had one of the other missionaries snap this picture.  It was a great experience to see them and spend a short amount of time with them.  Always inspiring.

If you would like, you can watch this talk given by President Wightman at Brigham Young University – Idaho.

We watched the great eclipse in Rexburg within a few hundred feet to the southwest of the Rexburg Temple.  Wightmans also served as Temple President & Matron at the Temple.  It was an experience I will not forget anytime in the near future.  One of those humbling experiences where you realize how puny man really is.

I thought about what other photos I might have of the Wightmans.  I found these four.  President & Sister Wightman served in the England Manchester Mission of The Church of Jesus Christ of Latter-day Saints about 1999-2002. 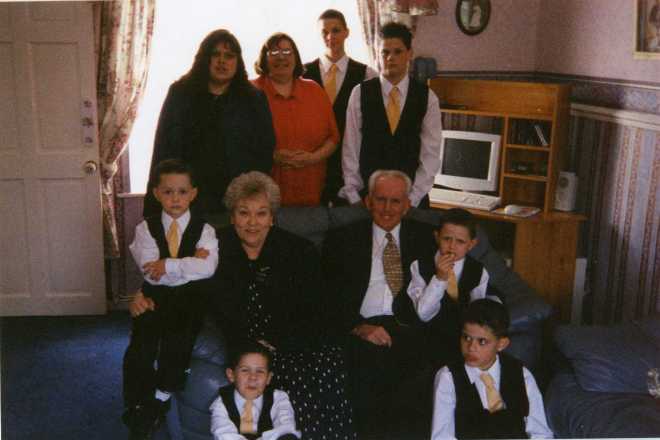 I do not recall why Wightmans were in Runcorn, maybe it was a baptism, maybe it was just passing through, maybe a Sunday.  This would have been in spring 2000, I believe.

This was taken in Downham, Lancashire, England as part of the Mission Tour.

Another photo from the same time, same location.

Goodbye at the Manchester England Airport

Last, a good-bye shot at the Manchester England Airport in December 2000.  Of course they saw us off at the airport as we went home.  Last time I saw them until I attended their homecoming in Rexburg, Idaho.

My life has been forever changed by the Wightmans.  I have mentioned them in other posts.  Phenomenal people.